Amosite is a fibrous mineral in the Amphibole group. It sometimes is described as “brown asbestos” or “gray asbestos.” Its color comes from the natural presence of 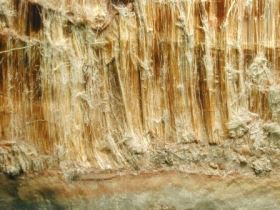 iron and magnesium found in this form of asbestos. Its harsh, spiky fibres have good tensile strength and resistance to heat. In buildings, amosite was used for anti-condensation and acoustic purposes; on structural steel it was used for fire protection. Between the 1920s and the late 1960s amosite was used in preformed thermal insulation, pipes, slabs and moulded pipe fitting covers.

This form of asbestos was first found in South Africa and was mined extensively there. Amosite is considered to be one of the more hazardous forms of the material. Large numbers of South Africans who mined amosite are known to have asbestos-related diseases. Countless numbers have died.

Brown asbestos is now banned in most countries and has been for a number of years, but it can still be found in older products and structures, therefore still posing potential dangers. Because this form of asbestos is highly friable (breakable into small pieces that can be inhaled), it is especially dangerous.

The Amosite form of asbestos is also called Grunerite