Tremolite is a member of the amphibole mineral group. It forms by metamorphism of sediments rich in dolomite and quartz. Pure magnesium tremolite is creamy white, but the color grades to dark green with increasing iron content. It has a hardness on the Mohs scale of five to six, which puts it in the middle compared to other minerals. 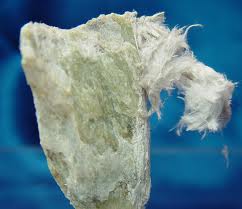 Tremolite asbestos can be found in some talc deposits. Some of the talc products reported to have contained asbestos over the years include: